This is a seriously cute piece; it’s another Phonograph called ” Le Mervilleux” (Meaning =  “Wonderful”) and was made by Henri Lioret around 1894. 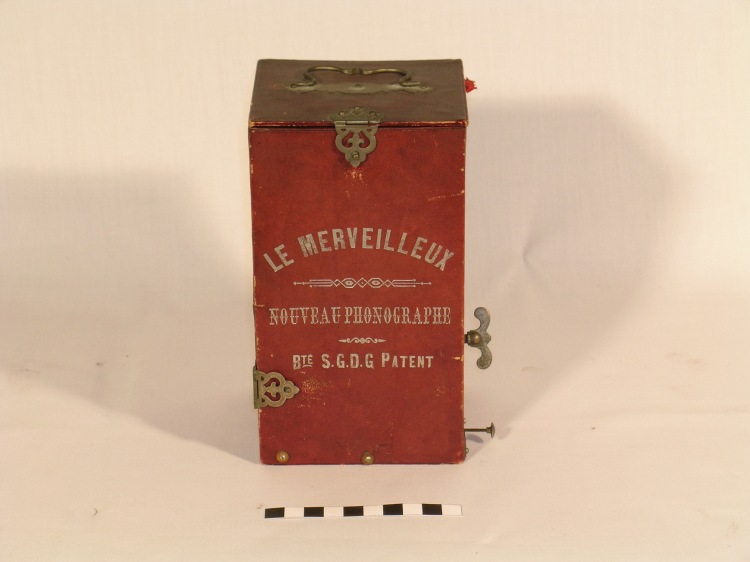 Our friends at EMI Archive Trust, who own it, describe it thus:

“Henri Lioret was a respected clockmaker before turning his attention to phonographs. This unusual phonograph was made from around 1894, and based on the same mechanism that Lioret used in his Bebe Jumeau talking doll. The mechanism itself is mounted inside a pasteboard box and finished with a simulated leather covering. A side flap opens to allow access to the cylinders, and a top flap opens to reveal the integral-horn. This machine played only the smallest of Lioret cylinders, lasting a mere 30 seconds. Despite its simplicity and fragility, the Merveilleux plays extremely well for such an early phonograph. Their fragility too, makes them a relatively rare machine. It was also the first entirly Lioret machine to be sold, with a price tag of 16 francs.”

Lioret’s first commercial idea for playing back recordings was the talking and singing Bebe Jumeau doll mentioned above which had in effect a phonograph as innards. It looks like something from an episode of Doctor Who.

This strange looking toy, which was very successful in France, represented a step forward in recording technology as it was the first non-tin foil cylinder made in France. It contained improvements upon Edison’s original design including the fact that the cylinders were made out of celluloid and were the first unbreakable cylinders ever made. You can see more Lioret stuff, here.

So now you know!

We’d love to make contact with people who have an interest in these kind of devices. Please get in touch via the comments section below.