This week we plan to tell the story of how Emile Berliner and Fred Gaisberg set up their record company in America. Seven blog entries on seven days. This is day #6. It’s late 1895 and the fledgeling gramophone enterprise has just raised $25,000 from the Philadelphian syndicate to expand the business. Berliner now begins to look around and take on more staff.

His first move was to increase his research staff. Fred Gaisberg suggested his brother Will, who was just about to leave school and was desperate to join his big brother in the recording game. Berliner was happy to take the younger Gaisberg on but Fred’s father thought otherwise. Will recalled in later years, “My father informed my brother that he did not think that he should let two of his sons start their careers in such an uncertain business as the talking machine. His friends with whom he had discussed it agreed with him. I was put to selling coal, and a school chum of mine, William Sinkler Darby was given the position.”

William Sinkler Darby would go on to have a long recording career and would travel the world with Fred Gaisberg making many of the first recordings in each country that they visited. We followed them in their Russian trip of 1900, where they picked up these wonderful bearskin coats (not so wonderful if you are a bear.) Darby is on the right, Fred on the left. 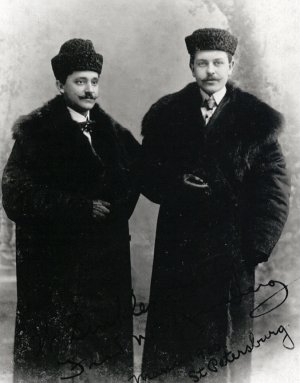 Was Will Gaisberg bitter? Probably a little. Did he while away his life in the coal business? No. His father’s reticence to allow him to join elder brother Fred restrained him for only a short while. In early 1901 Will followed his brother across the Atlantic to join him at the Gramophone Company in Maiden Lane.