This week we are planning to run a five day series of blog entries about a maverick who was involved at the start of the very start of the record business when its pioneers were searching to find the best business model to capitalise on the new sound-recording and playback technology.

Patrick Feaster, a music historian, explained. “We have long thought of the phonograph as something that simply reproduced music but early uses of the phonograph were incredibly experimental. People were trying pretty much everything, trying to figure out what they could put on these recordings to make a buck, everything from hymns and prayers at one extreme to obscenity on the other end.”

Russell Hunting was a right man in the right place as the record business came into being. An intriguing mixture, he was part entrepreneur, part rogue, funny, unconventional, sometimes the artist and occasionally a business executive. Things appear to never have been dull when he was around. This is day #1 of 5 about the early years of Russell Hunting, a big extrovert so retrospectively elusive that we can only find this one very small photo of him.

Hunting was born in 1865 and would have been 12 years old when Edison invented the phonograph and 29 and working as a thespian by the time that he (perhaps inevitably) entered the orbit of Fred Gaisberg.

When Gaisberg threw in his lot with Emile Berliner’s new gramophone business, his primary role was to make recordings that Berliner could use to demonstrate the quality of his new invention. After he had completed the first batch in 1894 Hunting burst into his life, “The much advertised Burlesque show entitled Faust Up-to-Date visited the Albaugh Theatre next door to our lab which was at 1410 Pennslyvania Avenue, Washington. The stage manager was Russell Hunting. He also played the part of Mephistopheles, and, dressed in red tights was shot up from the bowels of the theatre into the midst of a bevy of dancers. 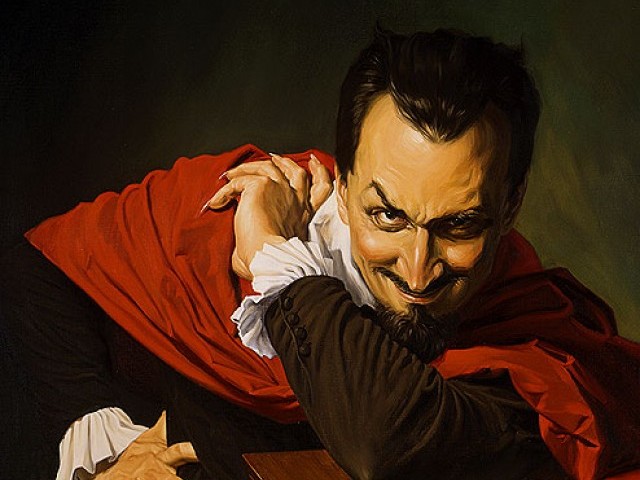 I knew him as the originator of the “Michael Casey” series of Phonograph records. They consisted of rapid-fire cross-talk between two Irish characters, with Hunting taking both parts. His fine voice had an infinite capacity for mimicry. In his spare time he made these cylinder records in his hotel room and they had become famous among exhibitors.

I argued with Berliner that by an investment of $25 ($2,200 in today’s money) for five titles, we would have a dazzling attraction in our campaign for capital. It was, for us, a huge investment, but we took the plunge…”

The Michael Casey records were comedy records. They were very popular and did brisk business with the patrons of the nickel in the slot phonograph listening machines. Hunting recorded the early ones before being replaced by a series of other actors who then played Michael Casey in much the same way that we’ve seen a number of different actors play James Bond. You can hear on of Hunting’s efforts “Casey at the Telephone” here

A wider catalogue of Hunting’s recordings are available on the Charm website, here.