“The whole world saw it and succumbed to its charm”

-Alfred Clark comments on the painting

Francis James Barraud was born into a family of artists in London. He studied art at the Royal Academy School and in Antwerp. An accomplished technician, he was a frequent exhibitor at the Royal Academy and else where. One of his early works An encore Too Many is displayed in the Liverpool Walker Art Gallery, and the painting His Master’s Voice brought him world wide fame. 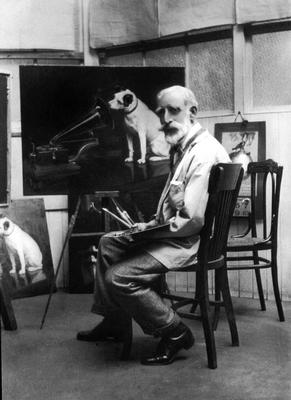 Barraud was never to recapture that success, however and by 1913 he was in financial straits. When he learned of this situation Alfred Clark commissioned Barraud to paint a copy of His Master’s Voice for the Victor Company. Thereafter, Barraud painted a total of 24 copies of his most famous work. In recognition of these services, the Gramophone and Victor Companies paid Barraud a pension. His Master’s Voice remains one of the world’s best-known trademarks.