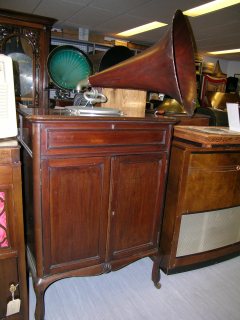 This Auxetophone is in the ‘Queen Anne’ Style with a highly polished mahogany cabinet with panelled doors and cabriole legs. It has a triple-spring spiral-drive motor, 12″ turntable, speed indicator, tapering tone-arm with gooseneck, auxetophone soundbox, and a mahogany grained Flaxite horn.   Courtesy of the EMI Group Archive Trust collection

The Auxetophone was perhaps the most effective attempt, prior to the development of electrical amplification in the 1920’s, of increasing volume. Invented in 1904, it used air pressure to enhance the vibrations of a specially-designed reproducer valve. An electrically-powered blower inside the cabinet forced air through the tubing along the tone arm and through the special reproducer, enormously increasing the volume. The machine did not sell particularly well, in part due to price, and in part due to the fact that it was not well suited to home use (it was extremely loud and meant for mass public consumption).The sales literature promoted its use in “large residences,” and the market was thus largely restricted to commercial applications such as dance halls and theatres. 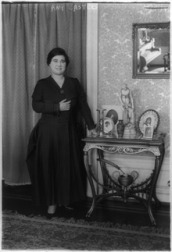 A ‘Grand Gramophone Concert’ was given at the Royal Albert Hall on 14th December 1906, about which The Daily Mail wrote; ‘ Many ladies were visibly affected when Madame Patti or rather the gramophone sang ‘Home Sweet Home’. The rendering recalled in a startling manner her singing at the same hall on the occasion of her farewell concert a few days ago….The most effective example of what the gramophone can do was demonstrated immediately after Miss Amy Castles had sung in person as her encore was a repetition of the song on the gramophone itself’.