He doesn’t look very happy in this picture, but this is David E. Hughes, former child prodigy harpist turned inventor who was a very successful and significant man. He was born 180 years ago yesterday.

Hughes was a contemporary of Thomas Edison and Alexander Graham Bell and paddled in the same new technology waters as them. He made significant contributions to radio (he transmitted electromagnetic waves in 1879; 16 years before Marconi but put it to one side in the face of peer scepticism) and telegraph technology (he invented a printing add on that made his fortune).

Hughes also invented the early microphone and in doing so helped set the modern recording industry on it’s way.

There is a Hughes Medal that was named after him and is still awarded each year by the Royal Society “in recognition of an original discovery in the physical sciences, particularly electricity and magnetism or their applications”. You can hear a strange computer lady talk about it here.

A biography of David E. Hughes, “Before We Went Wireless” was published this year. You can find out more about it here or watch the promotional video:

One hundred and fourteen years ago, in December 1897, an American businessman was pacing up and down his room at the brand new and ostentatious Hotel Cecil on the Strand.

The hotel had been opened the previous year in 1896 and was the largest and grandest in Europe, situated in the most fashionable shopping street in the world. Sadly it didn’t survive changing fashions and was knocked down to make way for Shell Mex house in 1930 but back in the day, it looked like this:

Hotel Cecil from the Thames

Hotel Cecil from the Strand

Dancing at The Cecil was all the rage. 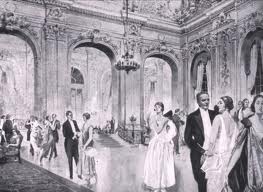 The American, who was William Owen Barry, was not there to dance. He had moved across from the US to set up a new company. In fact he was seeding a new industry that did not yet exist in the UK; sound recording. He needed investors and had presumably taken rooms at the expensive Cecil in order to suggest the seriousness and potential rewards of his business proposal.

He’d met a number of potential investors since arriving in London in the summer but had not yet been able to secure the necessary funds. Hotel bills and entertaining expenses were no doubt growing as he trawled the town for financial suitors but as he came to end of the year he still had little to show for his endeavours. No doubt there would have been pressure coming from his boss, Emile Berliner, in the States – probably along one of the new telegraph cables that were shrinking the globe. He was pacing up and down the room as he waited to meet a potential investor; Trevor Williams (or to give him his formal Edmund Trevor Lloyd Williams) was a Welshman from North Wales who worked as a solicitor at Lincoln’s Inn and impressed by the new technology and had a yen to invest.

But the American needn’t have worried. The Welshman had formed a syndicate to invest $5,000 to secure the European rights to the new fangled Gramophone. They shook hands on a deal and agreed to work together to establish and grow this new business. They would reconvene in the New Year to dot the i’s and cross the t’s and formalise The Gramophone Company. Possibly a glass or two were taken? Maybe a cigar smoked? And then the Welshman would have stepped outside onto the teeming Strand, back into the bustle of the city at the centre of a huge empire, at the peak of the Naughty Nineties, head spinning with the new business opportunity….

P.S. In the years to come, their company would return to The Cecil to make records of the house band….