We’ve stumbled across a wonderful book called “The Talking Machine Industry” written by Ogilvie Mitchell in 1924. It is a bit of a hack job to be frank. Mr Mitchell’s style is frothy and he gallops across a range of subjects to do with the history of recorded music at that point (i.e. less than 50 years after Edison invents the phonograph). The book is one of a series of books about Common Commodities and Industries and appears to have been partly financed by adverts from the industry in question (and in return features some product placement). Long since out of print, it’s a fascinating read. We particularly enjoyed the review of the four big UK companies of the day and will reproduce a section about each of the big four over the next few days, starting now with The Gramophone Company – the predecessor company to the modern EMI. 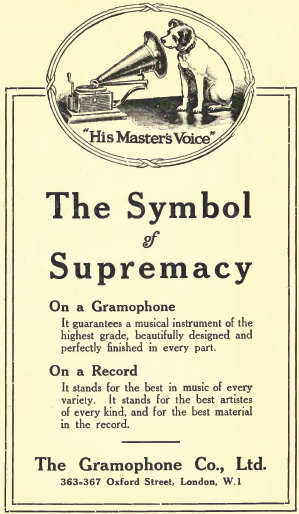 “In England at the present time there are four companies manufacturing the higher priced records. Of these The Gramophone Company, Ltd., undoubtedly holds the field. The history of this extensive concern has already been referred to cursorily in a previous chapter, but we would like to lay before the reader a more comprehensive chronicle of its origin and rise. Like most of the other large firms engaged in the industry The Gramophone Company began its career in America. As previously stated, Berliner was the man who gave the term “gramophone” to his invention of a disc machine, though he never claimed an exclusive right thereto. In 1896 or 1897 Berliner sold his English patent rights, including, it is said, his rights in respect of certain patented improvements, to a private firm calling itself The Gramophone Company, taking its name from the instrument. In 1899 this concern transferred its business to a company incorporated under the style of The Gramophone Company, Limited, the object of which, as defined by its Memorandum of Association, embraced, inter alia, the manufacture and sale of gramophones and phonographs and gramophone discs and phonograph cylinders. The last mentioned firm continued to sell machines and discs made under Berliner’s patent until the following year, when it parted with its business to a company with a larger capital. This new concern had about the same time acquired an interest in typewriters, and was incorporated as The Gramophone and Typewriter Company, Limited. The same year the Tainter-Bell patent expired, and the engraving method being considered superior to etching, the company abandoned the latter process and adopted the former, continuing, however, to use the name of gramophone. There was nothing wrong in that, for the essence of the Berliner system was the sinuous line of even depth and the word “gramophone“ had come to denote a disc talking machine, as opposed to the phonograph and graphophone which were at that time operated by cylinders.

The Gramophone and Typewriter Company established a branch in England almost as soon as it was inaugurated, with Mr. Barry Owen as its representative, and some time afterwards dropped the typewriter section of the business, reverting to the old title of The Gramophone Company, Ltd. They had their offices in Maiden Lane, Covent Garden, and so rapid was the growth of this British branch that a company was formed with a share capital of £600,000, the ordinary shares in the first instance being offered to the trade. Thereupon they removed to the City Road where they remained in full swing until the extensive works at Hayes, Middlesex, which were opened in 1907, were ready to receive the army of workers of every description attached to the firm. This enormous factory has been enlarged and developed since that date until it now covers twenty-three acres of ground.

Ever since the expiry of Berliner’s 1887 patent The Gramophone Company had arrogated to itself the sole right to the term “gramophone.” In its dealings with the trade it had consistently claimed monopoly rights in the word as denoting goods of its own manufacture only, and by warning circulars, legal proceedings and threats of legal proceedings, had done its best to support its exclusive claims. Other manufacturers refrained from describing their instruments as gramophones from the dread of infringing the alleged rights of the company. The gigantic bubble, however, was destined to be pricked.

In the year 1910 the company applied for power to register the term “gramophone” as applicable solely to the wares manufactured and dealt in by them. The most memorable case ever heard of in the talking machine world of this country ensued. It came before Mr. Justice Parker and lasted four days. Experts, legal and otherwise, were called, examined and cross-examined. The court was crammed with all the leading lights of the trade, who were there either as witnesses or as spectators. At length judgment was pronounced Power was refused, and the word “gramophone” became the property of anyone who had a disc machine to sell. A verbatim note of the whole proceedings was taken at the time by the Talking Machine News, and was published the morning after judgment was delivered. It was the only paper that printed the case in extenso.

In legal matters The Gramophone Company have been rather unfortunate, for previous to the case we have spoken of they lost one over the Gibson tapering tone arm in 1906. This was an invention for which they claimed sole rights. These were disputed and the action went against them. Nevertheless, if they have been unlucky in the courts it cannot be denied they have been marvellously successful in business. Before the war there were subsidiary companies in various capitals of Europe, and they were connected with the great Victor Company of America, which has now a large controlling interest in the concern. The Zonophone Company, too, has been absorbed by this firm.

During the war a portion of the huge factory at Hayes, the foundation-stone of which, by the way, was laid by Madame Tetrazzini, was given over to the manufacture of munitions. It is believed that The Gramophone Company was the first industrial concern, not normally engaged on Government contracts, to convert their plant. Within ten days of the declaration of war, the output of certain essential fuse parts was commenced. These required extraordinary accuracy and the mechanism at command of the company enabled them to make a beginning almost at once.

Of the artists exclusively engaged to make the famous “His Master’s Voice” records for the company we shall speak later, and in the chapter devoted to the “Talking Machine as a Teacher ” we shall have something to say of the firm’s efforts in that direction.”

We’ve been trying to find more information about the author but little is available. He appears to have written several pulp novels around the turn of the twentieth century and at least one song called Heroes. (Not the same song as was later recorded by David Bowie!)