Gaisberg’s first continental recording trip with William Sinkler Darby had begun in Leipzig in May 1899, where Thomas Birnbaum the Managing Director of the German Gramophone Company, joined them to travel to Budapest, Vienna and ultimately the dazzling musical city of Milan. The trip had been a mixed bag; lots of fun, some successses but Gaisberg ultimately left Italy a mite down-hearted at his failure to record any significant artists during their stay in Milan. 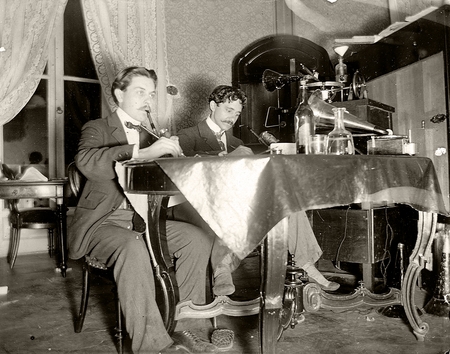 Their next stop was Paris. This was where the thrusting Alfred Clark was building a highly successful recording operation. He leveraged his growing local power to deliver a series of great artists to Gaisberg’s recording sessions. Fred later recalled: “Alfred Clarke had all the vision of youthful enthusiasm, and it was not long before he had enticed to his recording studio the great stars of opera and concert halls”

It was also here that Gaisberg remembered making records with Clarke’s assistant so that they would fit both Edison’s cylinder and Berliner’s rival disc: “I recorded the first discs in Paris in 1899 under Alfred Clark’s direction. Cleve Walcott, his assistant, would record simultaneously the same artists on cylinders, as he [Clark] was then building up both a cylinder and disc catalogue….” This explains how Clark managed to reconcile the recording format wars and service both the cylinder and disc part of his Paris based business.